When writing, whether just a casual note, an important business document, or a masterpiece, it’s nice to have a draft or a sketch first. This way, you can be sure that you will produce fine work. Most likely, you want to use a pencil for your draft or sketch – but what if you make mistakes? Fortunately, you can use an eraser. But what if the tool you are using to clean up mistakes is itself not clean?

Here’s how to clean erasers impeccably.

Before you can tackle the effective techniques for cleaning erasers, you first have to know how erasers work and why they get dirty. Knowing how erasers work will help you attack its dirty problems from the root.

How Do Erasers Work?

Erasers work by friction. Friction is the resistance of movement of one object in relation to another. The rougher the two objects are, the more friction they develop when moved against each other.

When you rub the eraser against the paper, the friction created helps loosen the graphite particles of the pencil. If the eraser is too hard or you rub too hard, you might tear the paper because of the friction abrading the paper’s fibers.

The dirt you see on your eraser is the graphite particles sticking to the rubber of the eraser.

There are many methods for cleaning erasers. But for me, the best method is one that requires the least effort.

Gently Rub the Eraser Against the Sandpaper

Very gently rub the eraser against the fine-grit sandpaper. The finer the sandpaper is, the better. Sandpaper roughness is measured by grit, the higher the grit number, the finer it is (the less rough it is). I advise getting sandpaper categorized as 400-grit or higher.

I still advise rubbing the eraser gently because you can still rub off too much of the eraser if you are applying too much pressure.

Keep Rubbing the Afflicted Parts of the Eraser

Keep on gently rubbing all the dirty parts of the eraser until there is no more trace of graphite on it.

Move to New Sections of the Paper as Eraser Gunk Accumulates

Move to fresher sections of the sandpaper as shavings accumulate over some parts.

Place the Eraser in an Eraser Case

I strongly suggest storing your eraser in a special eraser case. An eraser case prevents your eraser from getting hard or picking up dirt. It will considerably lengthen the eraser’s life.

If sandpaper is somehow unavailable to you, you can use a blank piece of white paper. The steps are the same as using sandpaper. The difference is that it might take you longer to clean the eraser. The paper does not rub off the same amount of gunk as sandpaper does.

How to Clean Kneaded Erasers 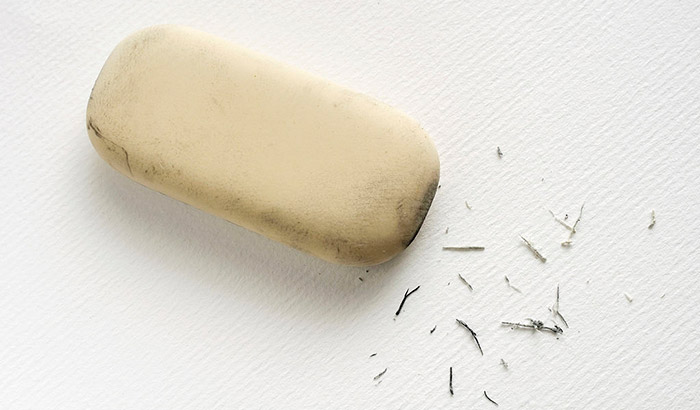 What if your eraser is a kneaded eraser, which has different features than a regular eraser? Kneaded erasers are malleable erasers that you can form into practically any shape you want. It is good for erasing precise points in a drawing.

It works the same way as a regular eraser. It loosens up graphite (or colored pencil pigments) from the paper and picks it up. However, because it is soft and pliable, the sandpaper or regular paper method will not work.

So how do you clean kneaded erasers?

In my opinion, the best way to clean kneaded erasers is to knead again and again like a piece of dough. Two possible things will happen.

One is that the cluster of graphite will be trapped inside the kneaded eraser. It will no longer be able to affect the erasing capability of the tool.

The second possibility is that the graphite will be distributed evenly in the eraser. The low concentration of graphite within the eraser will no longer mess up any other drawings.

The problem with this technique is that sooner or later, the kneaded eraser will be so filled with the graphite that it won’t be able to erase any more. But that is not exactly a big deal. Kneaded erasers are meant to last for only so long.

I see some artists try cleaning up kneaded erasers by picking off the clusters of graphite from them. I can’t argue that the process does not work, because it does clean up the eraser. But I think that it significantly shortens the eraser’s life. As you pick off the graphite particles from the eraser, you will inadvertently pick off small chunks of the eraser.

So, for me, the best way to clean kneaded erasers is to keep on kneading it until it looks like its regular color again.

Ensuring that your cleaning tool is clean is necessary. If the cleaning tool is dirty, it will do more harm than good. It will not be able to fulfill its intended purpose. The techniques I discussed here on how to clean erasers are highly effective. These are the methods that ensure your eraser lasts as long as.