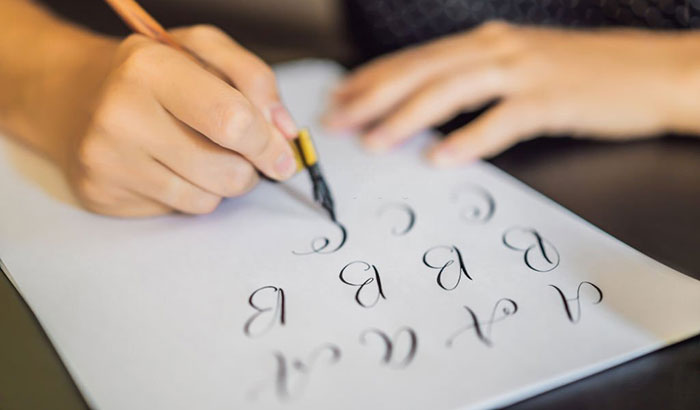 Let’s get down to it!

Learning the Basics of Calligraphy Writing

Any skill you want to learn requires setting down the perfect foundation. In calligraphy, the foundational skills consist of something as minute as how to hold a pen or how to make upward or downward strokes. You have to practice those little details repeatedly until you develop muscle memory.

How to Hold the Calligraphy Pen

Maintaining the proper calligraphy pen hold requires you to relax your fingers. They should not do most of the work and only have minimal movement. The movement should come from your arm.

Another essential point about holding a calligraphy pen is its angle on the paper. Most calligraphy pens use nibs, which gives them unique variations on their strokes. Nibbed pens need a forty-five-degree angle so they can release the ink smoothly as it glides across the paper. If you hold it too vertically, the ink will flow faster due to gravity and cause a big blob on the paper. If you keep it too flat, the ink will not get out of the nib at all.

If you are using other tools for your calligraphy writing, you should still apply the proper holding techniques. Whether you employ pencils, brush pens, or markers, you should still keep your fingers relaxed as you write and maintain a 45-degree angle. The only factor that changes when you use other tools besides dip pens or calligraphy pens is the absence of nibs and tines.

The Lines of the Calligraphy Guide Sheet

A guide sheet will come in handy when just beginning your calligraphy journey. It has four parallel horizontal lines and angle lines. The angle lines serve as a guide to how angled your letters will be; you can choose this aspect according to your preferences.

The ascender line determines how tall letters go, such as h, t, capital P, b, and more. On the other hand, the descender line dictates how low the tails of a letter go. Examples of letters with tails are y, p, j, g, and more. 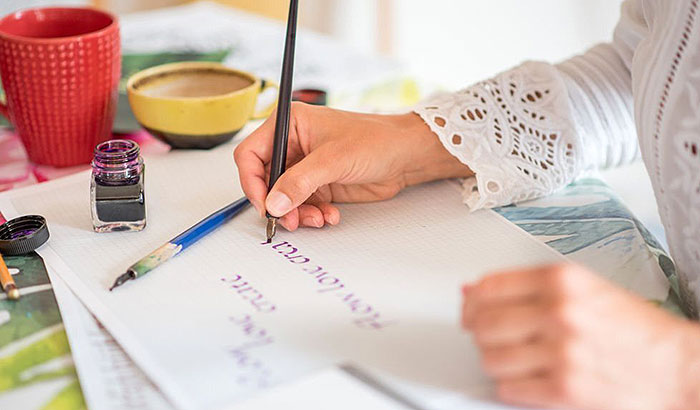 Next, let’s talk about your calligraphy strokes.

No matter what tool you’re using, the general rule of calligraphy is your upward strokes should be thinner than your downward strokes to create contrast. Calligraphy is all about harmonious writing – harmony among the lines, spaces, shapes, forms, etc. Consistency is critical in beautiful calligraphy.

Every time your pen moves downwards, you should apply slightly more pressure than moving it upwards. Only the calligraphy tip touches the paper when you move it upward. Before you attempt writing elaborate letters or words, you should practice writing upward and downward strokes repeatedly.

Consistently make the downward and upward strokes with the correct pressure to create stroke contrast. Keep repeating the strokes until you commit them to muscle memory.

The oval stroke starts with a downstroke from the mean line to the baseline, then curling upwards to make an oval.

Consistency makes the beauty of calligraphy. Each of your strokes must be consistent. Your angle or slant must never falter. And your spacing must always be precise. For this reason, I strongly suggest practicing with a calligraphy guide sheet for about a couple of hours every day for around two months. Professionals agree that two months is the standard answer to how long does it take to learn calligraphy.

And the answer to “how to practice calligraphy” is consistently. The more consistently you practice, the more you commit the basics to muscle memory. Over time, you won’t even need to think about the specific aspects of calligraphy writing – pen hold, pressure, slant, spacing.

Let’s recap how to learn calligraphy. You begin with the basics – how to hold the pen, knowing the parts of a calligraphy guide sheet, and the basic strokes of calligraphy. Then you practice consistently for about two months. Keep repeating the movements until your muscles memorize the actions. Over time, you won’t even have to think about making your writing beautiful; your muscles will do all the work.