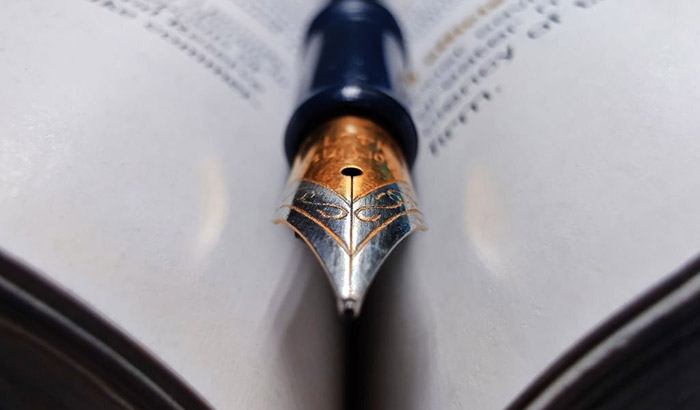 Calligraphy dip pens are incredible tools because of their exceptional versatility and unique writing results. The problem with such items is that they can be hard to maintain and expensive to replace. This guide is for you if you’d rather make your calligraphy pens that won’t require extreme care.

How to Make Calligraphy Pens at Home

Getting high-quality calligraphy dip pens is costly, and you have to take great care of them so they won’t deteriorate. You have to clean them after every use, or the nibs won’t work right and might even rust. But if you create a calligraphy pen with cheap materials, the need for high-end maintenance diminishes. This process only requires a few easily accessible items.

The materials and equipment you need to make functional calligraphy dip pens are:

Step 1: Cut the Aluminum Soda Can

Chances are, the edges of the aluminum piece are sharp and rugged. Use your scissors to make the edges as cleanly cut as possible.

Clamp about half an inch of the ice cream stick in the folded aluminum piece. The aluminum piece should be wider than the stick, so you’d have to cut the excess width along the side of the stick. Use electrical tape to secure the stick to the aluminum piece as tightly as you can.

By now, your makeshift pen should look like a miniature shovel but with a rectangular end instead of a triangular one. One side of the “shovel” should be wider than the other side. Use a pair of pliers to tightly bend the wider side towards the stick clamped within the aluminum. Then, use a pair of scissors to make a diagonal cut from the bent side of the aluminum to the end opposite the stick.

The diagonal end does not have to end with a very sharp point. You can make the tip of the makeshift pen wide so you can create stroke contrasts with it.

An essential difference between using this homemade pen and an actual store-bought calligraphy dip pen is the application of pressure. You have to adjust the pressure on a calligraphy dip pen as you write with it. But with the device you create with this guide, you have to change the angle of your hold on the pen to develop stroke contrasts.

Why Using a Soda Can is Helpful

Technically, you can make a calligraphy dip pen using only an ice cream stick. You just have to cut the stick at an angle, and it can function the same way as the homemade soda can calligraphy pen. However, using the soda can has one glaring advantage: it has an ink reservoir.

An ice cream stick has no ink reservoir. You have to dip the “pen” after a stroke or two. But with the homemade calligraphy dip pen in this guide, you also have a makeshift reservoir.

Folding the aluminum and squeezing the stick in the folds creates space inside the aluminum. That hollow space functions as an ink reservoir, making the pen a lot more like an actual calligraphy pen.

Learning how to make calligraphy pens using everyday home items is an excellent skill to have. You have the freedom to create exciting adjustments on your nib that can produce unique strokes. You can let your creativity run free and customize nibs that make very wide strokes or choose to keep the lines slim. Happy homemade calligraphy pen-making!