What are chalk markers? If you are an 80s or 90s kid, the only chalk that you are familiar with is probably the one used for writing on sidewalks and blackboards. Nowadays, you can get the same kind of writing effect in marker form. This article will teach you what a chalk marker is and what it is capable of doing.

What You Should Know About Chalk Markers?

Everyone is familiar with chalk, especially if you were a student during the 80s or 90s before blackboards went out of style in schools. These days, chalkboards are usually only for use in diners and cafes. They use it to display their menu items.

On the other hand, kids today still seem to like using chalk to draw on sidewalks. But what are liquid chalk markers? These are seemingly magical pens that leave a mark that looks just like the ones that traditional chalks leave behind.

However, these make more uniform marks. With that, you can expect them to work great for calligraphy, drawings, and other types of art projects.

Chalk markers do not actually contain any chalk in their inks. The pigments used for the inks give the medium vibrant and bright colors. When the chalk marker ink dries, it creates a matte surface, unlike regular ink, which dries glossy.

Although their writing looks similar, these two writing implements have a lot of differences. Among the areas where you can find the differences are the following:

Although chalk and chalk pen markings look similar, touching them will help you tell which one is which. The reason is that the two have different textures.

With the calcite or gypsum used in creating traditional chalk, you can expect it to receive a dusty and dry texture. You will also get a bit of chalky residue on your fingers.

Meanwhile, because they use pigmented ink, chalk markers leave a smooth and liquid texture. If you write on a permanent surface, you will not get any chalk marker residue.

Old-fashioned chalk came in stick form, usually 3 inches to 5 inches long, or in a chunkier form like sidewalk chalk. OG chalk can be quite tricky to use. The line thicknesses are quite random and it is difficult to make a line that is uniform in thickness.

In addition, a new piece of chalk can grind across the blackboard, creating a teeth-grinding noise. Traditional chalk also creates a lot of dust, especially when you erase it. This can be a problem for people who suffer from asthma.

On the other hand, as its name suggests, chalk markers are in the form of a felt-tipped pen, which they actually are. This makes chalk markers more convenient to use. Also, because the markers use pigmented inks, they do not produce any dust when writing.

If you use them on non-porous surfaces, you can also erase the markers without creating any dust whatsoever. In addition, because these markers use liquid ink, they write a whole lot smoother than original chalk sticks. You will not get any residue on your hands because all of the ink is in the pen body.

How the Lines Look

When you create a line using traditional chalk, it will have soft edges, giving it a nostalgic look. The fact that gypsum is a material for making the chalk makes the lines leave behind a porous mark.

One more thing you should know is that you are basically leaving a trail of powdered chalk. This is the reason why the colors created by chalk are not as vibrant. In most cases, you cannot even tell the difference between the green and yellow chalks.

Chalk markers create more solid lines but they still have somewhat softer edges compared to other types of markers. Also, because these pens use pigmented inks, the colors are brighter and more vibrant. You can easily tell the differences between the colors.

Basically, traditional chalks are powder trails that are loosely holding onto the surface you are writing them on. This makes them easy to erase. You might not be able to erase the marks completely, as there will still be some faint trails left on the surface.

Chalk markers are more difficult to erase, especially if you used them to write on porous surfaces. This is why these markers are great for creating signages. Even rainwater will not be able to erase their marks.

Surfaces They Can Write On

The biggest difference between traditional chalk and chalk markers is the kind of surface on which you can write them. Traditional chalks can only be written on somewhat rough surfaces, like wood painted with chalkboard paint.

If you try using traditional chalk to write on smooth surfaces, like glass, there is not enough friction for the chalk to hold onto.

On the other hand, a chalk marker can write on essentially any kind of surface. Aside from porous surfaces, like paper and wood, chalk markers can also write on smooth surfaces easily. In fact, many crafters use chalk markers to customize drinking glasses and mugs. 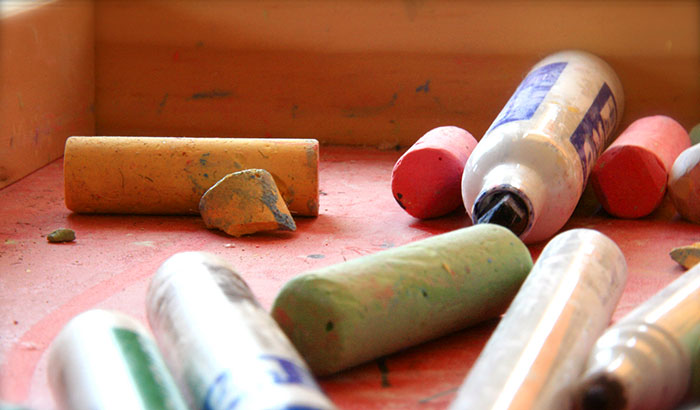 Can you Make Chalk Markers Permanent on the Glass?

Although you can use chalk markers to write on glass, the marks are not permanent. Once the marker ink dries up, it will start to crack and peel off the surface. However, you can make the chalk marker permanent by spraying paint sealer over the markings.

How do you Erase Chalk Markers?

If you wrote on a non-porous surface, you can easily erase the marks using a bit of rubbing alcohol. However, it can be quite difficult if the marks are on a porous surface.

What are Chalk Markers Used for?

You can use chalk markers wherever you need to write on a dark background and where ordinary markers are almost invisible. Also, these markers can add whimsy and wonder to any calligraphy project you might have.

What are chalk markers? If you want to get the same kind of effect that you get when using traditional chalk, then chalk markers are ideal for you. What’s good about them is that you can use them without the mess while also being somewhat permanent.

If I dare say so myself, chalk markers have all the perks of traditional chalk, but without the hassles of dust and residue. They are also more versatile as they can write on almost all surfaces, even non-porous ones. This is something that regular chalk sticks cannot do.