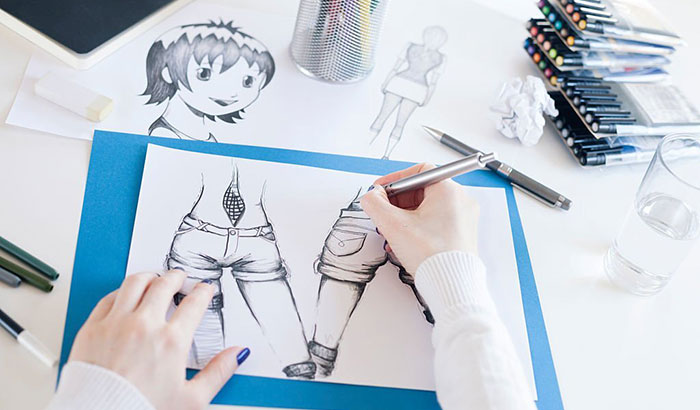 Using old-fashioned inks and pens will teach you the basics and how to be more careful and deliberate with each stroke. If you master the use of traditional manga drawing tools, transitioning later to digital will be much easier.

In the manga, only black ink is used. There are no gray or lighter shades of black, or other colors in manga aside from the cover page. This is why most mangakas (manga artists) use traditional dip pens.

Many recommend these types of drawing pens because you can increase or decrease the line weights depending on how you hold the pen and how much pressure you place on the tip.

Dip pens come with a variety of nibs, and changing the nib you use can greatly change the kinds of lines that you can draw. Here are some of the most common nibs used for manga drawing:

This is the most common type of pen nib used by those who draw manga. G-pens are frequently for drawing the outlines of characters and also for contour lines.

Another nice thing about using G-pens is that you can subtly alter the thickness of the lines easily. You just need to put more pressure on the nib if you want slightly thicker lines. For thinner lines, you just let the tip of the pen glide on the surface of the paper, hardly putting any pressure on the tip at all.

This is the pen that most artists used for drawing fine lines. Most mangakas use this type of nib for drawing the individual hairs in a character’s eyebrows, eyelashes, and hair.

Typically, mapping nibs are the tools of choice for mangakas that create shojo manga (girls-oriented manga). Many prefer this because this type of manga usually requires the characters to have long, flowing hair, and expressive eyes.

When you need to draw lines of uniform thickness, you either choose a school pen or a spoon pen, for thin and thick lines, respectively. The reason why these pens can draw uniform lines without that much effort is that they are stiffer than the previously mentioned nibs.

You will also need to select the most suitable nib holder. Aside from mapping pen nibs (they have their own nib holders), you can use any nib holder for your dip pen nibs.

When choosing nib holders, it is all about what you feel most comfortable using. You will be using these pens for hours on end, so you should at least be comfortable holding them.

These are the felt-tipped pens that allow you to draw thin lines uniformly. These pens come in different sizes, usually measured in 0.05mm increments.

Drawing pens make it possible for you to draw uniform lines in increments of millimeters. The usual sizes used for drawing manga are 0.3mm, 0.5mm, and 0.8mm. You can often use these pens to draw finer details, like wrinkles on clothes, tiny scratches on materials, etc. 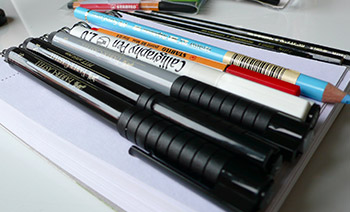 Brush pens are the ones that have large and flexible felt nibs. They work just like ink brushes, but these are more convenient to use. Brush pens are usually for filling in large spaces with ink.

For filling in large areas and adding a glossy finish to black hair, you can insert your pen directly into ink or use a brush pen. Many artists also use this pen to paint characters’ hair.

White ink pens are typically used for erasing lines that go over the frames and for fixing errors. Many manga artists also use white ink for adding highlights.

You need to be careful when using white ink pens because most of them cannot be drawn over once dried. You need to plan before you use this pen.

What About Digital Drawing Methods?

Do manga artists draw digitally? These days, because of the hectic schedules imposed on mangakas, more than 80% have quit using traditional drawing methods full time. Most mangakas nowadays use digital drawing tablets.

However, some still use the traditional drawing methods, at least initially. For instance, when drawing the covers for his manga, Eiichiro Oda, the mangaka for the hugely-popular One Piece manga, would first sketch on paper.

He would then finish the drawing digitally, cleaning up the lines and adding the color.

Some mangakas still use the traditional ink and paper method. However, if you need to finish one book every week, digital is the way to go.

Now that you know what pen do manga artists use, you can start on your hunt to find a set for yourself. The nice thing about manga drawing pens is that they are relatively cheap, so you can start practicing your art immediately.

Remember that having the right tools is important when it comes to drawing manga, but you still need to dedicate enough time for practice to get good at it.