Whether you are an artist yourself or an art enthusiast, you have surely heard of Vincent van Gogh, it could be through some of his well-known artworks like the Starry Night, the series of Sunflower paintings, or his self-portrait pieces.

The late Dutch painter is famous and considered one of the greatest of all time because his works greatly influences the development of modern painting, but also because of his reputation as a struggling artist who barely makes a living despite his dedication, isolated and unappreciated during his lifetime, who suffered mentally, that leads to his suicide.

There is so much more to it than just his artworks and the poignant reminders of his tragic life,
both his life story and his art inspires the new generation of artists, musicians, as well as filmmakers, some even created their pieces to honor the late painter.

Vincent’s brother Theo arranged an art exhibit a few weeks after his death, with most of his artworks on display to honor the memory and life of his brother. Not long after, around half a year when Vincent died, his brother Theo died because of his declined health.

Leaving Jo van Gogh alone with a child to raise and a house full of Vincent’s artworks. She decided to put Vincent’s art in exhibitions as well as letter exchanges of her late husband and his brother which was the pivotal moment for van Gogh’s reputation and works of art.

Jo wanted the world to see Vincent’s paintings so she had them on exhibition loans to museums all over the world, which caught the attention of art enthusiasts and gained more and more sales over the succeeding years.

Vincent van Gogh was way ahead of his time

He never managed to fit in, he keeps on searching for a place where would feel free to express his true authentic self but each time he ends up as an outcast. He found inspiration around him and saw them in a different light.

He often saw himself and all his artworks as failures because regardless of how much harder he tried to be better at what he did, very few appreciates its worth and beauty. He lived in a time when the art scene is in constant transition from Realism, and Post-Impressionism, to brief movements like Pointillism.

In the middle of all these, van Gogh’s paintings appear to have a balanced combination that added up to their authenticity. In the last 5 years of his life, he became more experimental and even managed to create a niche that no other contemporaries of his time ever tried.

His intricate brush strokes and color play on the canvas were nothing they have ever seen before and during that time, it is not a very wise move to think out of the ordinary. Confined with these ideals, people saw it as strange and not advanced, which is also why Vincent van Gogh’s paintings are famous up until today

Vincent van Gogh was Dutch by birth but never really restricted himself and kept his exploration throughout his artistic career. His inspiration keeps on shifting, he went to one place after the other, trying to immerse himself in their own culture to somehow translate it into his art.

One of his biggest influences is the realist works of Millet and his contemporaries, another influence that Vincent had was the traditional Japanese woodblock prints. He even created some inspired imitations with the addition of his style which increased his popularity with the Eastern audience who are interested in canvas reproductions.

He only sold 1 painting in his lifetime 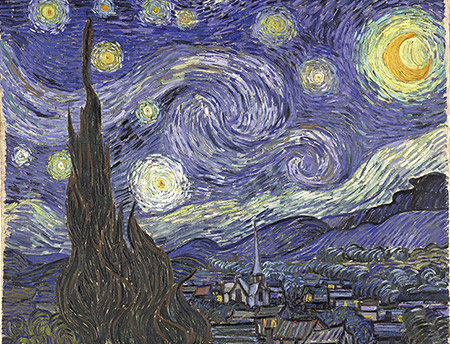 His life as an artist was considerably short, he started at the age of 27 and ended his own life at the age of 37, it was only 10 years but he left a large collection of artworks that consist of over 850 paintings and almost 1,300 works on paper.

Sadly, out of all these works of art, he only managed to sell 1 painting in his lifetime, this resonates loud, particularly with young artists who are still finding their footing in the art industry and their confidence in their art is heavily dependent on external validation.
His lonely and tragic life

Lost and confused as to what he should pursue and dedicate his life to at an early age, Vincent took 27 years to finally find his purpose, her parents did not agree with his choice to be an artist but he was determined to be better in his craft and took every chance he got to learn more.

Theo plays a big part throughout Vincent’s entire life but he is also the one who suggested his brother focus on his creative nature, and so Vincent listens. He was linked to some lovers but none of it worked out for good, it was just him and his art most of the time.

His diet consists of mainly bread, coffee, alcohol, and cigarettes, and most of his money is spent on art materials. Since he doesn’t have enough to pay for models, he paints himself, landscapes, and still life to practice his skills.

He eventually found his style and dreamed of setting up a studio where artists like him would come together and create art but that too ended up badly, causing him to damage his ear in the process. Paul Gauguin was the first and last to move into the studio due to their differences in beliefs.

And as if he never fully recovered from the incident, his mental health issues got worse and voluntarily admitted himself to a psychiatric hospital where he painted his most famous masterpiece Starry Night and 150 more artworks in a span of 1 year.

Once released from the hospital, he went to a village near Paris, Auvers-Sur-Oise where he shot himself in the chest with a pistol, the gunshot did not kill him but the infection of the bullet was unremoved in his body after 2 days, which ended his life.

It’s a valuable lesson to keep believing in yourself even when no one does. Keep working hard for it, you will never know when your time to be recognized will come and it is important to keep on doing what you feel you do best. External validation surely feels good, but internal affirmations feel better.